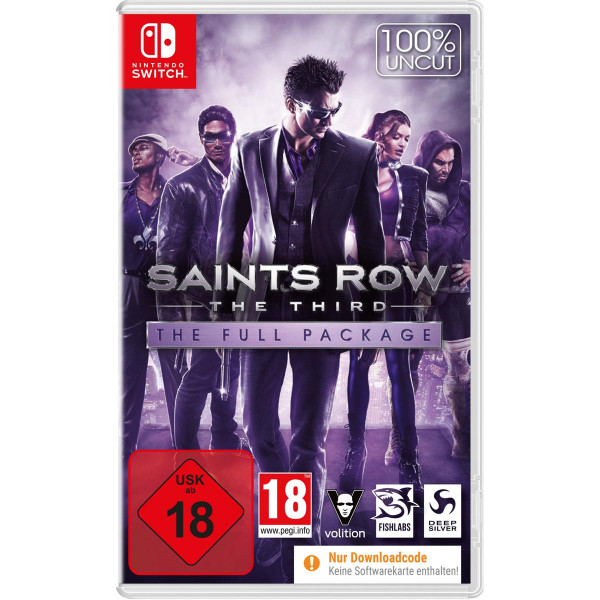 Saints Row: The Third - The Full Package puts you in control of the Saints at the height of their power and lets you savor life at the top of the food chain.

Take the wildest chapter of the Saints Row saga into your own hands on Nintendo Switch and take the fight to Steelport, a depraved town engulfed in a tide of sin, sex, drugs and (lots of) guns threatens. This is your city. These are your rules.

It's been years since the Third Street Saints conquered Stilwater and went from being a gang to their own brand of sneakers, energy drinks and Johnny Gat Bobblehead figurines. The Saints are the kings of Stilwater, but their superstar status hasn't gone unnoticed. The Syndicate, a legendary crime network with worldwide affiliates, is now taking its toll on the Saints.

But rather than bend to the Syndicate's will, the Saints fight the Network in the once-glorious city of Steelport, which has become a swamp of sin and crime. Fly a tank through the air, unleash a satellite-based airstrike on a Mexican wrestling gang, and defend yourself against elite troops with nothing more than a sex toy. Welcome to one of the craziest games ever.

Saints Row: The Third - The Full Package is the long-awaited release of the acclaimed fan favorite - for the first time on a Nintendo system including new features for the Switch!

Saints Row: The Third - The Full Package includes the game "Saints Row: The Third" as well as all three mission packs and more than 30 DLC items. Almost all content that has already been published is already included on the data medium. (The Bloodsucker Pack and the Unlockable Pack are not included)