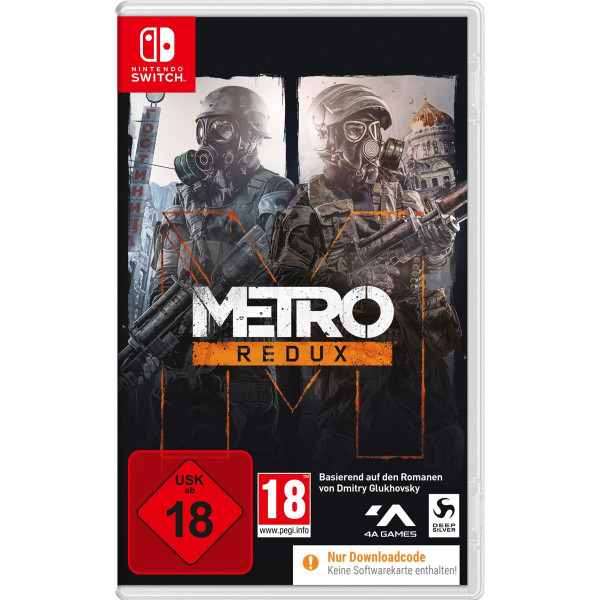 Experience two of the best story-driven first-person shooters of all time for the first time on Nintendo Switch in Metro Redux! Metro 2033 and Metro: Last Light combine exploration, survival, deadly action and stealth passages into a unique and gripping experience in one of the most atmospheric game worlds ever.
In addition to the two main games, Metro Redux includes all expansions released so far. Both games benefit from challenging AI, incredible lighting effects, great physics and dynamic weather effects, as well as improvements to controls and weapon handling, and new full-body animations. In addition, both games now also feature the "Survival" mode, which means an even more intense fight for survival, and the "Spartan" playstyle, in which you are equipped with numerous combat abilities.

Metro 2033
The year is 2033. A whole generation was born and grew up underground after a nuclear war. Your besieged metro stations fight for survival - against each other and against mutated horror creatures that live in the outside world. You are Artyom. You have never left the city limits, but a fateful event leads to a desperate mission to travel to the heart of the Metro system to warn the remnants of humanity of a terrible impending threat.

Metro: Last Light
In the year 2034 the surface of the earth has become a poisonous desert contaminated with radiation. In Moscow, former residents of the city have found a new home in the underground tunnels. In these catacombs, they fight for their survival against hordes of cruel mutants born from the toxic atmosphere and other factions desperate to take over the few remaining habitable areas. A civil war is inevitable. You slip back into the role of Artyom and become the last hope of all mankind.